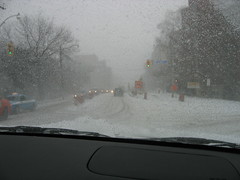 Leaving Toronto during SNOWACALYPSE
Originally uploaded by gnat23
We arrived in Toronto on limited sleep, picked up the rental car, and immediately began the adventure: hanging out with some of Ace's friends, eating amazing food while surrounded by photos of Coppi in 1950's cycling races, uncovering some amazing finds in the thrift shops (including a long-lost love for a tux coat with tails).

The original plan was to drive up to Montreal right away on Friday, but we quickly re-learned that Canadian winters do not believe in things like "reservations" or "schedules" and dumped on us a winter flurry that made even the locals shake their heads with respect. Sledding the little rental car gingerly past multitudes of accidents, we finally came to the wise decision that we shouldn't press on. Conveniently, midway to Quebec was Ace's parents' bed and breakfast, thus we detoured there and rode out the rest of the storm with scotch and books by the fire.

Monday, we took a change of clothes and finally drove up to the promisedland. Signs turned to French the instant we crossed the border into Quebec, prompting Ace and I to philosophize about the troubling problem of when to vocalize certain consonants in the spoken language. I am convinced that the only words I will ever rightfully pronounce are "quiche", "Bordeaux", and "Alpe d'Huez". To my relief, I was able to contextualize enough to refuse a shopping bag for a small toy, blunder my way through a bistro menu, and flirt with a bartender. We mostly brag about ice skating in a rink in Old Montreal long enough to get to the outdoor bar, drink cider liquor out of glasses made from ice, and finally partake in legendary classic Poutine. (NOM!)

Driving back, we popped over to Ottawa to snowshoe with Ace's brother and sister. So I don't want anyone calling us weather wimps. Oh and it was dumping rain when we went back to Ottawa after Christmas for an impromptu visit to the Science and Technology museum.

Back to the bed and breakfast, where the holiday traditions were in full effect: too many cookies, drinking from 11am on, board games and festive parties, presents opened, and the singular baby was lavished with attention. When we finally left Sunday morning, it was gusting wind so bad that it nearly pushed the car into the next lane. Finally, bumped into the ol' ninnie crew (Sean and Michelle and Mark) for burnt brunch in a cute cafe before spending the next three hours in various lines to be allowed onto the plane.

I can't tell you how nice is it to return to somewhat stable and predictable weather.
Collapse