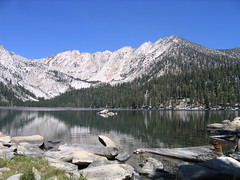 Hike to Devil's Bathtub
Originally uploaded by gnat23
Gnat sends an email to her boyfriend: Hey, I haven't seen much of you lately! He responds with a camping reservation to Mono Hot Springs, CA. Well, OK! Never heard of it before, but it's just south of Yosemite, so hopefully some awesome spilled over.

5 hour drive, with the last bit through some pretty crazy single-lane cliff-of-death territory. Set up the tent in the dark and crashed with only a vague idea of where we were.

Woke up the next morning and rubbed our eyes outside the tent to find Sierra mountain views, a gurgling stream, sunshine, and a crisp feeling of autumn. Some hearty oatmeal fueled us for a hike out to Tule Lake and Devil's Tabletop.

We found the lake without any problems (look! pretty!), but with a mental map and some energized feet we made the decision to hit the Table: "A high plateau that you can only get to from the backside," said the guy at the General Store. "You'll have to climb a bit," he warned, but that just made it more appetizing. The mesa appeared to be made entirely of fragile shale; it crinkled and slid under our feet like a pile of broken seashells. At the vertical section near the top, Ace nearly gave me a heart attack when he fell off the cliff-face into a pile of pine needles, losing a shoe and leaving me squealing and deciding how I would drag his broken body out if I had to. We found an easier way up, and nobody got hurt. The views were absolutely worth it!

We somehow got back barely using any trails at all (I was only worried for a little bit). A soak in the mineral hot tubs soothed the legs and feet, and I was treated to a fire-grilled dinner of fajitas with a bottle of wine, then we drank port and scotch until the embers shimmered.

As Ace raised his glass to the star-sprinkled sky, he declared with a grin: "This does NOT SUCK!"

Sunday was an easier but longer hike, 4.5 miles up to Devils Bathtub, to an impossibly clear lake nestled 9100 feet up in a cup at the foot of several postcard-worthy mountains. It sparkled when the breeze moved across it, which also whispered through the treetops and disturbed the circling insects. We sunned ourselves on a slab of granite, munched peanut-butter sandwiches, blinked, realized it was all still there.

It's hard to believe that this stuff still exists. Getting away from the politics and cell phones and sitcoms and billboards and just being surrounded by trees and rocks and scurrying lizards. It's one thing to be an environmentalist at home by recycling my junk mail and eating organic veggies and riding my bike, but there's something to be said for seeing what it is I'm saving exactly. I try not to take it for granted, this beauty that is so close and tangible. I appreciate the fact that I am healthy enough to get to these weird locations, that I have someone who is there with me, that it's possible to still see places that look like Ansel Adams photographs.

Two thumbs up, would camp again!