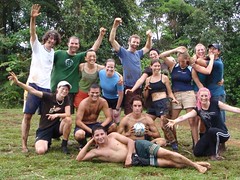 Rara Avis futbol
Originally uploaded by gnat23
Q: Where did you go?
A: Everywhere!

Ace and I wandered around bustling San Jose centre for a few hours, enjoying a beer during the afternoon rains. Immediately, we were off to the Carribean side, stopping in Puerto Viejo de Talamanca and making a quick run to the jungles of Manzanillo. Then to Tortuguero in the northern part of the country, accessible only by boat (or small airplane, technically). We briefly crossed into Nicaragua long enough to get our passports stamped, then it was three hours by tractor and a one hour hike to reach Rara Avis in the middle of the rainforest. Then north to La Fortuna, near the Arenal Volcano and home to dozens of adventure opportunities. A horseback ride brought us up into the hills for a few days at the Monteverde Cloud Forest. Finally down to the Pacific side, relaxing for several days near Quepos at the Manuel Antonio National Park.

Q: What did you do?
A: Everything!

Whitewater rafting, rappelling through a waterfall, and ziplining over the top of the treetops during a downpour. There were countless hikes through the wilderness. We snorkled, we rode horses, we boated, we spelunked. I ate the fruit of a cashew, launched myself down a waterslide at the lava-warmed mineral hotsprings, and bathed at the foot of a waterfall. We war-painted ourselves in mud and played soccer in socks during a thunderstrom. We drank fresh daiquiris by the beach, teased lizards, and surfed (well, I *almost* stood up). I learned to salsa, lounged in a hammock, played cards, got bitten by a tick. We ran through the mud over a carpet of angry ants, which is a little freakier having seen the latest Indiana Jones movie. We visited a coffee plantation, smoked Cuban cigars, grilled some pineapple, and enjoyed many a cheap cervesa. I lost my sunglasses to the river and an earring to the ocean.

The only thing we didn't do after consideration was bungee jumping: instead of bridges and rivers, they had a crane that dropped you over a sidewalk. Didn't seem to have the same romance to it.

We didn't get see the sea turtles, as it was the start of their egg-laying season, but it wasn't for a lack of trying.

Breakfast was usually rice and black beans, an egg, tropical fruit, toast, jam (pineapple marmelade is my new favorite), and a random fresh juice. Lunch and/or dinner usually was a casado or "typical food": rice and beans, salad, meat, and plantains. Within this was a ton of variety! The carribean side had a nice hint of coconut milk in the rice and beans, while some places put all sorts of vegetables and herbs into the mix. Some places had fried chicken, while others had a fresh fish fillet. Plantains were sometimes sweet with honey and cinnamon, sometimes fried to a crispy chip, or smashed and fried with salt. Little dairy, very low-fat, tons of fruits and veggies throughout the day, and the refrain of "rice and beans" takes a surprisingly long time to get bored of, especially when there are an assortment of hot sauces and salsas to try.

We ventured out to some cool restaurants: lots of seafood, suprising number of Italian places, one place that was built around a C-123 plane that was part of the Iran-Contra affair, and another that was in a tree house.

Michael Pollan would be proud of me, tho. It wasn't until one of the last nights that I munched on some Pringles before another 9 pm dinner that I realized how long it had been since I had eaten junk food.

Some of my complaints I knew I would have going into it: bugs and other critters in the rooms, no hot water, clothes would never dry out, lots of driving. (Thanks for the heads up,

psychopompous_9! I even took a clothesline, but it didn't help at all.)

I was unprepared for: meals taken very late in the day and slow service (two hour lunches and three hour dinners apparently the norm). Servers who would argue with you if you had an issue. Nickel-and-diming fees or haggling over prices already agreed upon.

It was strange as well to visit a "second" world country. While tourism is really booming, and there is plenty to cater to us visitors who want to spend money, there is yet the population that is still very poor, and it was enlightening to see just how little stuff they had and what they did for entertainment. It launched the dichotomy in me of simplicity (I won the prize for "lightest packer") vs. consumerism (craving the nice watches at the duty free). Tis food for further thought.

Other than that, I consider this to be one of the best vacations I've ever taken! The locations were amazing, the density of adventures almost unbelievable, good companions (thanks, Ace!), friendly people, and a chance not to think about work for almost three weeks.