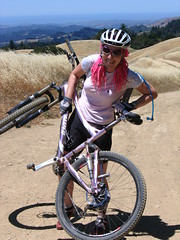 Last time I tried a Safire Comp, and it was my first time ever off-road. I enjoyed the bouncy, but was terrified of much of the treacherous rocks-and-roots. I found the thing spinning its wheels trying to grab onto the loose dirt on steep uphills, and I just didn't feel comfortable until I was on some flatter and more open areas. I almost bought it, though, with the idea that it would just take more practice to get comfy.

But, on Ace's suggestion, I tried again, same trail, with the next grade bike up: the Era FSR Marathon. And, for the sake of comparative shopping, I tried to isolate as much as possible how much of the difference was from the bike and how much was just my own comfort level being off-road again. And, well, I dare say it was no contest.

Mostly, this bike is so much lighter. I never think that those little ounces and grams would make a huge difference, but taken as a wholesale entity, I couldn't believe the contrast. Not only did I zip up the slippery hills with nary a skid, but bombing downhill no longer felt like being belly-down on a radio flyer on an icy kiddie-hill. Every time I tried a split-second decision to refashion my attack line, it responded with gleeful compliment and applauded my bravery. I slowly got more and more gutsy, until I finally tried going over something that stopped our forward momentum, and before I even got my first cussword out, I was unclipped and safe with both feet and both tires firmly on the ground. Heart-thumping!

Now the only problem is that I *really* don't need another bike. Really.
Collapse