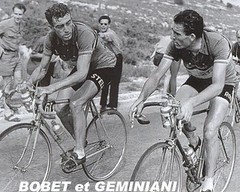 Louison Bobet (left) racing on his Stella
Originally uploaded by gnat23
OK, what I've learned about the Stella so far:

Ok, now I should actually put the darn thing together. I wish I had it for Bike to Work day on Thursday, but there are parts in the mail and things yet to do. Ah well!
Collapse