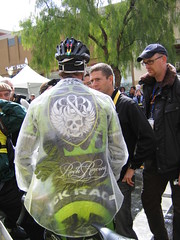 Cipollini at the back
Originally uploaded by gnat23
Forecast: Rain, light showers, and rain. Ah well. I checked out from my hotel with a few hours to kill, so I found some good parking and sat with a latte to finish reading Chris Carmichael's "Food for Fitness" book. He was recommending far more carbs than I was anticipating, but okay, that's fair. Monday will start me in the "Foundation" phase, so I'm curious to see how I feel at the end of March.

Then: stand in the rain near the start line. Had a good spot, had great conversation with a couple from near the area as well as one of the official photographers ("I dubbed you: a hat for all locations," he said). The cyclists wisely waited until the last possible moment to sign in, thus giving us a quick but frantic parade until the starting time. Most had raincoats on, and in the racer interviews there was jokes about the weather. This year has just been brutal on the race, and I'm a bit of a wimp on this stuff, but I would *not* have wanted to be out there for seven hours in a downpour with headwinds like they had on the way to San Luis Obsibo. Today didn't look that much better.

So I made the executive decision to skip Pasadena. I know it was the finish of the race which is fun, but to be honest, I got everything I needed from this week already. And the few hours' head start on the 5+ hour drive back home was appreciated by my feet and sanity. I checked live race updates from the cell, and they kept talking about how it was dumping buckets. I had some regrets, but mostly relief at not being out there. I took a detour to Father's Office for some chow (would kick myself if I hadn't), but otherwise it was a straight shot with the iPod blarin' back to Nor-Cal.

So lemme see. I have a bell for Slamonella (email me your addy!

), I got Cipo's autograph on my tire, I danced with the Specialized Angel at a hip dance club, I saw some stunning scenery, I rode in a team car for a time trial, I rang my bell and pushed some cyclists up a hill, I ate an awesome burger, my car is a wreck of maps and Fig Newtons, I think I got some fun photos, I bought myself a Slipstream shirt, I have posters for my office, stickers for my chemistry notebook, a dvd of unknown origin, I met tons of awesome people, and well... I think I need to sleep! I have to transition back to normal life tomorrow. :(
Collapse